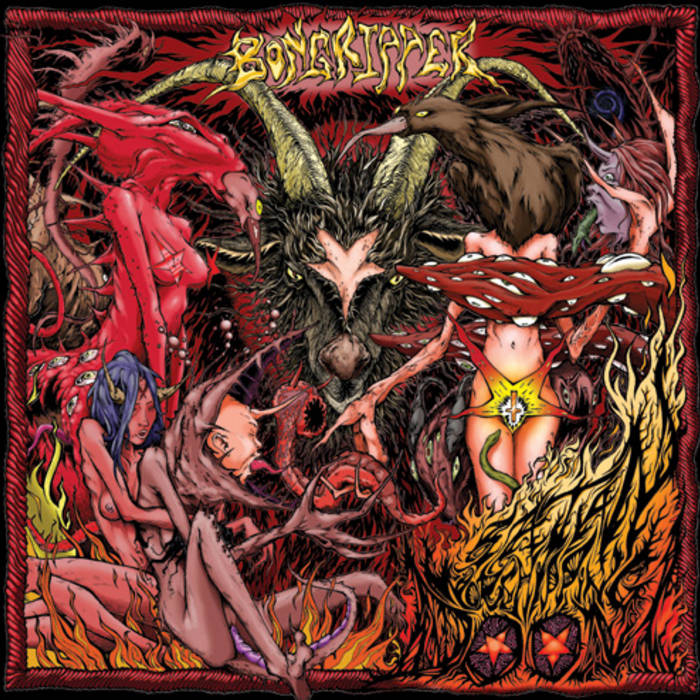 tomekbe doom metal at its finest

goblintoof Doom so good even Christ himself would worship. Favorite track: Satan.

Let me preface this by saying that instrumental doom, in any of its various incarnations, is not always the easiest thing to pull off. A lot of bands in the genre get away with making utterly boring and lifeless music, doing nothing to separate themselves from the rest of the pack. But when a band tackles this genre and does it well -- I mean really well -- it can be some of the most powerful and crushing shit you can subject your ears too.

That's where Chicago's Bongripper enters the picture. Since the band's inception in 2005, these guys have been all over the map experimenting with all that is heavy. Their monolithic debut full-length The Great Barrier Reefer is still one of my all-time favorite sludgy doom albums and the perfect record to rock while passing around the blunt (or bong, as the case may be). And since that album's release in 2006, these guys have been very busy.

Just a year after their debut, they released the cleverly titled fan favorite Hippie Killer. The band then went on to explore a different angle with an all drone/noise album simply titled Heroin (perhaps the best packaging ever), which was followed up in 2008 with Hate Ashbury, an album that attempted to mix the crushing groove and doom sound of their early releases with the spaciness and dirt of their noise material.

Now, after five years of experimenting and refining their sound, Bongripper is back with a double LP that captures all of the band's strengths, without any of the fat. From the downtrodden and sluggish riffage to the more textured and effects-laden ambient sounds -- SATAN WORSHIPPING DOOM incorporates the very best that Bongripper has to offer, with everything in its right place.

The first track, "Hail," kicks things off with a very nice groove that will inevitably get your head nodding. The riff builds up so effortlessly that you don't even notice the subtle changes, and before you know it you've arrived at the next point in the song. Bongripper has always been good at navigating the listener through the swells and chuggs, and here they pull it off with the ease and confidence to rival any stoner metal vet. After the buildup, a short bridge comes in to showcase the bass in all of its distorted and chunky low-end goodness.

Which brings me to a definite high-point (no pun intended) of this album - the bass and guitars sound great. Each has a tone that's as thick as the smoke-filled room you stoners are sitting in right now, but they sit together well in the mix. Over the course of the album, one never really takes away from the other, which is all-important for an instrumental outfit like this.

"Satan" is my second favorite on the album and the one that stands out the most from all of the rest. After an intense buildup, the band breaks off into something a little faster with a riff that some may liken to a band like Krallice or Wolves in the Throne Room. The guys then take it back down a notch with a riff that sounds very old-school death metal to me, but fits just right with the style and feel of the rest of the album. After throwing some more signature grooves in there, the song ends on a high note with an outro that has a classic stoner metal feel to it (more along the lines of Sleep). While this track might stand out from the others, it doesn't reflect negatively on the overall feel of the album. It's definitely still Bongripper.

My absolute favorite song on SATAN WORSHIPPING DOOM is, without a doubt, "Worship." This song takes everything that I've come to know and love about this band and packages it neatly together in one 18 minute opus. The doom riffs are there in full and while the style of gradually changing/building upon a main riff (theme) is still present, the variations here, and on the rest of the album, span a larger spectrum than some of their previous work. The band utilizes all of their talents - and their effects - and pieces them together to create a song that flows in and out between the utterly heavy and the trance-inducing. I'd love to hear this song played live.

In conclusion, I have nothing but good things to say about this double LP. This is definitely the Bongripper that you've been waiting for. These guys have managed to take the best parts of their style and present them together in their most well-written songs to date. Everything you love about Bongripper is intact; it's just gotten better. It's amazing how under the radar these guys are considering how great the music is, but I am starting to see their name in more places. With some good distribution and a little buzz, this album could be the one that does it for them.

Bandcamp Daily  your guide to the world of Bandcamp

Cannibal Corpse's George "Corpsegrinder" Fisher stops by for an interview